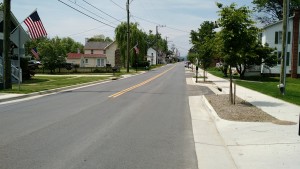 Phase 1 – Park Place to Community Center: Phase 1 of the East Broad Way Improvements was completed in December 2015. This project included sidewalk on the northside of the street, curb and gutter, underground storm drainage, parking spaces where space is available, and landscaping. Utility poles required relocation back out of the right of way in order to provide the space needed to construct the two 11-foot travel lanes required by VDOT. New street lights were also added to the street and most recently the Town added Holiday snowflakes for the Christmas season. 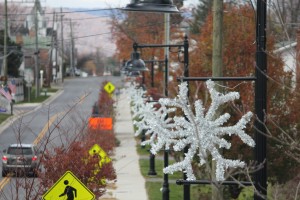 Phase 2A – Light Street to Park Place: The project will require surveying, design, VDOT review and approval, land acquisition for needed frontage easements, bidding and construction and is expected to take between three to five years to complete. The design process has begun and is almost through the Concept Design phase.
The Town has requested funding from Loudoun County and VDOT and has received partial funding awards. Additional funding applications will be completed during the next round of applications.

The intersection of S Church Street and E Pennsylvania Ave (S Ch/E PA) has been identified as a priority project in the FY19-23 Capital Improvements Plan. This project involves the same steps as described for E. Broad Way 2A improvements listed above. The goal of the project is to improve the intersection which may include widening as well as the addition of sidewalk, curb and gutter, storm water management and lighting as space allows. The surveying is done but Concept Plan work is not yet completed. 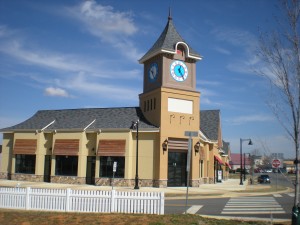 The Town of Lovettsville, formerly known as “The German Settlement,” has partnered with the developer of Lovettsville Square to incorporate a Clock Tower into the new commercial building facing the Town Square. The Clock Tower is designed to reflect the Town’s German heritage by including four large clock faces, a cuckoo bird, bells, and a Glockenspiel with figures expressing the Town’s character. Blending these historical elements into the new commercial center symbolizes how the growth of our community is built upon the depth of our history.

The Clock Tower construction was completed in the year 2016, culminating with the installation of the clock faces. The Town is raising money for the future cuckoo bird, bells and Glockenspiel.

Help make the Glockenspiel a reality! 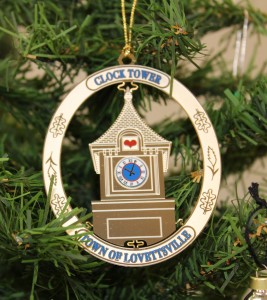