Lovettsville, originally known as The German Settlement, is a small town with historical roots that go back to 1732. The Town was laid out in 1820 by David Lovett and served as a thriving commercial center for the surrounding farming areas for over one-hundred years after its founding. The Town of Lovettsville and the surrounding area possess a number of features which make the community unique in the region, and indeed in the country as a whole. Culturally and socially, Lovettsville was much more closely associated with Frederick County, Maryland, than with the rest of Loudoun County. Among the long-time residents, that still remains true today. This feature arose from the fact that the 18th century settlers came from the north, from Pennsylvania and Maryland, rather than from the south and east (Tidewater Virginia) as is the case for the rest of Loudoun County. The early settlers were mostly German-Americans, whose families had come from Pennsylvania (and New York), through Western Maryland; some continued on into the Shenandoah Valley, starting in about 1731, but many saw no reason to go any farther. For more information about the early history of Lovettsville and The German Settlement, click here.

For about two centuries, Lovettsville was a largely self-sufficient, rural community, one in which people worked in the vicinity of where they lived. Lovettsville was a working town with a vibrant commercial center serving farms in the surrounding area. Even before the Town was laid out in 1820, there were one or two general stores here: Thrasher’s Store and Douglas & Fulton’s Store, probably on the north side of what is now E. Broad Way. A building “boom” was triggered by the completion of the B&O Railroad and the C&O Canal, to Berlin (Brunswick) in 1832, which allowed farmers to ship grains and other crops to Georgetown and Alexandria, and enabled merchants to obtain goods from Baltimore and later other cities. By 1835, there were four stores, two boot and shoe factories, a cabinet maker, a tailor, a saddler, milliner, and a tavern.

These German-Americans were fiercely patriotic in the Revolutionary War, and also later during the Civil War. The Lovettsville area voted overwhelming against secession (88 percent opposed) in 1861, and, along with Waterford (a Quaker community), raised the only organized military unit from the present state of Virginia which fought for the United States of America: the Independent Loudoun Virginia Rangers.

The African American Methodist Episcopal Church, school, and cemetery was founded in 1869 by five former slaves, who moved here from Orange County, Virginia because the Lovettsville area had a tradition of anti-slavery. The structure is located at the intersection of N. Berlin Pike and W. Broad Way. 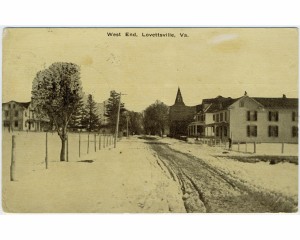 In 1880, when the Town’s population was 92, the Town contained two general stores, a millinery store, a jewelry shop, a clothing store, a furniture store, and two blacksmith shops. By the 1888-91 period, there were operating in Lovettsville: one baker, three blacksmith/wheelwrights, one coach/wagon maker, one dry goods merchant, one florist, one furniture dealer, three general merchants, one livery stable, one millinery store, two mills, one saddle/harness maker, one physician, two dentists, and one undertaker.

Around the turn of the century, in addition to those business establishments listed above, there were a total of four stores, three blacksmith shops, plus two fertilizer houses, a wheelwright’s shop, an undertaking parlor, two tombstone shops, a harness shop, a livery stable, and Reamer’s hotel, (plus a jail, five churches, and two schools). In the 1930s, there were five general stores in Lovettsville, which among them sold groceries, meat, farm supplies, including feed and seed, and gasoline and kerosene. There were also a number of livestock dealers in town. Other businesses were a meat store and butcher shop, at least two creameries, a couple of barber shops, and a blacksmith shop. There were three auto dealers in Town, representing the once “Big Three,” selling Ford, Chrysler and Chevrolet products.